XXXI session of the CIS Interstate Council on geodesy, cartography, cadastre and remote sensing of the Earth 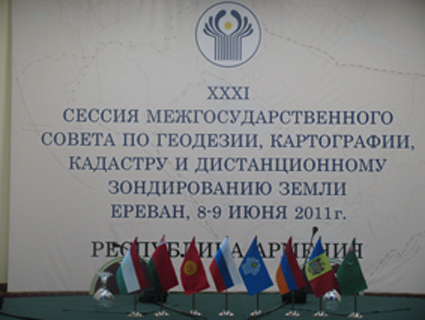 From 8 to 9 June 2011 the Moldovan delegation participated in the XXXI session of the CIS Interstate Council on geodesy, cartography, cadastre and remote sensing of Earth, hosted by the Real Estate Cadastre State Committee of Republic of Armenia.
XXXI Council session was devoted to celebrating 20 years since the Community of Independent Countries.
The work session was attended by leaders and representatives of central authorities in geodesy, cartography and cadastre of the Commonwealth of Independent States, as follows: Armenia, Belarus, Kyrgyzstan, Moldova, Russia, Tajikistan and Turkmenistan. Besides the work session was attended by Deputy Prime Minister of Armenia, Mr. A. Ghevokean and head for the security cooperation of the CIS Executive Committee, Mr. A. Drujinin.
In working sessions have been in discussions on national reports Aiutorităţilor central activity in geodesy, cartography and cadastre of the Community during 2010-2011, the priority directions of cooperation of the Republic of Moldova S.à report was presented by Ms. Maria Ovdii, Head of Department Geodesy, Cartography, Geoinformatics and European Integration of the ALRC.
Of special importance were issues related to the creation of Spatial Data Infrastructure of the CIS member countries, development of standards for work time Unique topo-geodetic and mapping with advanced technologies, development of geographic atlas of the Community, the Council on international cooperation, training specialists at the University of Geodesy, Cartography and the Russian Air lifting etc.
The next session of the Interstate Council XXXII will be hosted by the Russian Federation in the second half of 2011.
XXXIII session of the Interstate Council is planned to be hosted by the Republic of Moldova in the first half of 2012. 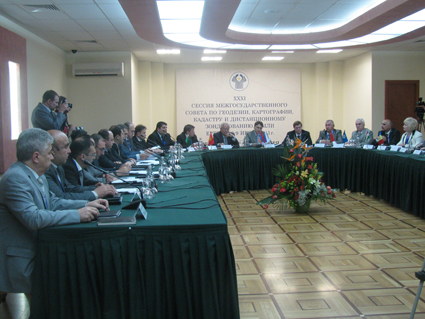