ROUND-TABLE DISCUSSION WITHIN THE FRAMEWORK OF TWINNING PROJECT 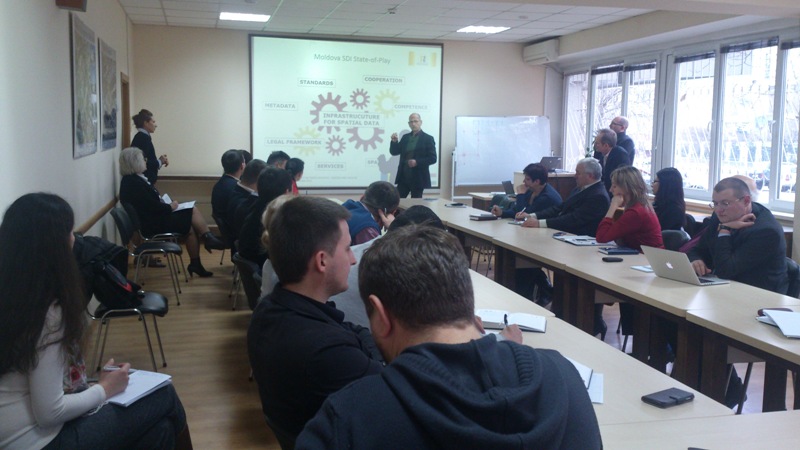 On December 5 2014, a first round-table discussion of the EU-financed “Twinning Project for the Agency of Land Relations and Cadastre (ALRC) - Organisation, Streamlining and Computerization Process in Mapping in the Republic of Moldova” was held at the Agency for Land Relations and Cadastre. The round table was organised within the first component of the project “Draft Geographic data umbrella law in line with the EU INSPIRE requirements”.  In order to draw the umbrella law, two experts from Sweden and one from Croatia worked in the Republic om Moldova at the Agency for Land Relations and Cadastre and studied the current situation regarding the legal frame work to approach INSPIRE vision. During their mission, the experts had meetings and interviews with different stakeholders. The aim of the round table was to present and discuss the findings of the current situation and recommendations for future actions.

Mr. Anders Ryden (INSPIRE coordinator, Lantmäteriet, Sweden) together with Mr. Tomislav Ciceli (Head of NSDI Coordination Department, State Geodetic Administration, Croatia) made a presentation of INSPIRE and its parts - the so-called “ingredients”. The presentation was followed-up by a presentation of facts found about the state-of-the-play in the Republic of Moldova as regards the establishment of National Spatial Data Infrastructure (NSDI), i.e. data sharing between institutions, competences, services and portals.

The presentations were finalized by recommendations for future actions.